Night At The Parliament

Posted on October 1, 2008 by Colin Galbraith 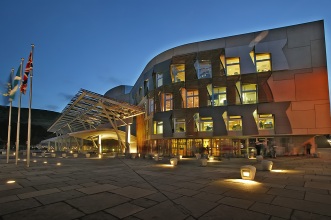 I read the first four chapters of Rankin’s new novel last night, and I’ve got to say it’s brilliant – even before all the juicy stuff begins. For all those critics that say Rankin is a one-character man, they should get themselves a copy of Doors Open because it’s thoroughly engaging.

I met Gail at lunchtime and she bought me a new jacket and jumper (birthday gifts). The jacket, believe it or not, is the first new jacket I’ve had for six years. The one I am currently wearing is the same one I wore on the front cover of Fringe Fantastic, which was three years ago – and it was three years old even then! Who said writers weren’t scruffy?

This evening was all about my dinner engagement with my sister, Lindsay, in the Scottish Parliament. Wearing a borrowed suit from my father-in-law, along with a white shirt and black tie (I couldn’t find my other ties other than the one I wore to a recent funeral), I made my way up to Holyrood in the drizzle. I arrived early so I nipped into Jenny Ha’s for a swift whisky while I waited on my sister. That turned into another one while she walked from Waverley Station, and then a third when she finally arrived.

She gave me my birthday present in the pub: a ticket to see The Prodigy in concert at the Glasgow Academy in December. I have ALWAYS wanted to see these guys in concert and thought I never would when they split up, and last month when the tickets went on sale I was unable to get any because they sold out so fast. Just as well, because my sister already had them!

From there we made our way over the road (literally) and into the front doors of the parliament building on Horse Wynd. We placed all our belongings in wee black boxes to be scanned as we made our way through the airport-style security point just inside the main door.

Successfully through, we found ourselves in the main reception area. It resembles a museum, with various poster boards and models dotted around, such as scaled down replicas of the building and the debating chamber.

Security was everywhere; young and old; relaxed and serious. We went up to the relevant check-in point at the desk and after a quick search we found our names and were given security passes. Unfortunately, I was registered as a delegate of The Company, which rather annoyed me, but didn’t stop me promoting my real vocation as a writer to anyone I would meet later on. Lindsay, who actually works for the Scottish Government as a policy advisor and speech writer, was well used to all this rigmarole, while I was getting visibly excited.

A security officer came over to us to guide us through to the Garden Lobby. He took us through various doors, along several corridors and up a couple of staircases, before we eventually came out in the Lobby. The design of the parliament is odd; it’s very eclectic and while I’m sure there is logic to it, I would hate to have to find my way around inside without a guide. The leaf design one can see from the outside is continued inside, as the ceiling dips and sways irregularly like it does on the exterior. I don’t remember seeing a flat roof, and even the banisters on the stairs are shaped and angled. It’s not displeasing; what I mean is, it isn’t ugly to be inside, but instead it’s interesting to look at. Each time one looks around, a new perspective is gained from it.

The Garden Lobby looks out over one of the gardens but where in the context of the building that was I couldn’t actually say. Along the right side as you come in is a desk where they gave us more name badges and took the ladies coats. That’s when our first free drink was offered: white wine, red wine, fruit juice or water. Lindsay took a glass of white, while I went for the red.

To the left as we went in was another stair case with a wonky banister, where a platform and microphone had been erected for the speakers. Further down to the left the room became glass and curved round to the ground to offer a view of the gardens. Straight ahead a corridor disappeared into the distance while in the corner, a band had set up and was playing a selection of popular tunes. Built into the roof were several leaf-shaped glass sections, letting in ligth, I imagine, at all kinds of weird angles during the day.

At around six o’clock the first speaker took to the stand; Gurjit Singh, President of the National Union of Students Scotland. That’s what the evening was about, you see; the NUS thanking the Scottish Government for their support, and to promote the coming year’s agenda. I told Gurjit when I met him later, that I thought he came across very well considering there was a cabinet secretary and ex-First Minister of Scotland present, and he explained that’s why he was gripping the stand so hard and had been up till 4am polishing the speech.

Next up was the delectable Fiona Hyslop MSP, Cabinet Secretary for Education and Lifelong Learning, and MSP for the Lothians. She raced through her speech, which barely gave me time to appreciate anything she said, but I think the gist of it was the promise that the Government will continue to work closely with the NUS, and the acoustics inside the lobby were good for live music; cue the band.

With the speeches over it was time for the serious delegates to mingle. My sister, as a representative of the Scottish Government, had to leave me at times to talk to people, but I didn’t mind given the top notch quality of the free wine that kept being thrust in my face. The buffet was pretty tasty too, with crab fish on spoons with different types of far eastern sauces, chicken with lots of lovely vegetables, canapés made from all sorts of delightful things, including my favourite which was a mini Mexican bite made from tiny wraps. Delicious. And the wine just kept on coming.

I didn’t just stand and drink all the time, be assured I also did some mingling of my own. I spoke to the band as they were clearing up who are a collection of local students from here in Edinburgh. I met a bloke called Robert Warman who works for Skill, an organisation that looks after the interests of students with disabilities. I met Ann McVie; top civil servant and also my sister’s boss. I tread on the Rt Hon Jack McConnell MSP’s (debatable) toes as I turned around to head for the buffet and never noticed he was there. He was in the company of Danny De Vito but I never got to talk to him. I wanted to ask why he was there at all but couldn’t get close. McConnell hardly left his side – I think it was a height thing. As I mentioned, I shared a few words with Gurjit Singh, President of the NUS, as well as speaking briefly with Philip Rhodes, an NUS executive. I met the waitress lots of times, after I compared her to being as lovely as the food she was serving, so she kept coming round with more crab fish on Chinese spoons for me. And I met the Russian waiter, who despite continually trying to avoid me, I managed to intercept more often than not so he could empty his bottle of red wine into my glass.

You can guess already, that by the time I left I was pretty well oiled. Who knew the Scottish Government had such a great taste in wine, and who knew they enjoyed letting hangers on like me walk into their home and helping themselves. Hold on, though – I’m a tax payer, so that means I paid for the wine, not them. Therefore, I was really drinking the wine that I paid for but had allowed them to choose. How wonderful democracy is!

Afterwards, Lindsay and I headed back over to Jenny Ha’s for another whisky and Morgans, and then further up the Mile to the Canon’s Gait pub for another. As it was getting late, I walked Lindsay to the station and saw her off to Glasgow, before jumping in a cab home.

Overall, I really enjoyed myself. It was fascinating to see inside the Scottish Parliament building and it was great to see my sister at work. From a personal angle, I got so much out of last night that I can use in a future novel. As I was standing there watching political leaders mixing with education leaders, I kept asking myself what Jackie McCann or DI Lennox would make of the situation were they with me. And with a new DI Lennox novel in the offing, maybe, just maybe, we’ll find out.

Web:
* No work scheduled at present

PLEASE DONATE – For full details of my Abseil off the Forth Rail Bridge in October for the Royal Zoological Society of Scotland, please go here:
https://rzss.workwithus.org/Fundraising/Donate.aspx?page=4212

4 Responses to Night At The Parliament